Colony Killer Termite Bait contains an insect growth inhibitor called chlorfluazuron. The termites feed on this bait which they take back to the nest. After a period of time, and multiple feeds, the entire colony will be eliminated.

Deadly to termites, but eco-friendly ingredients that are deadly to the lifecycle of the termites, but won't harm you, your family, your pets, or the environment.

Ready to use pouches you place directly on infected areas.

Worker termites take the bait back to the nest, killing the nest, removing the threat.

Created by an Aussie entomologist and former pest technician for Australian species and conditions.

Proven by thousands of Aussie homeowners.

By using this bait you can kill off whole termite colonies – not just termites that you may have found in and around your house.

These Colony Killer Termite Bait Stations are designed to be used in conjunction with the Termite Trap Monitoring Stations but can be used on their own if termites are found inside a house or timber structure.

There are 6 feeders in a carton. This is enough to kill a large colony or a couple of small ones. Feeders can be placed on top of a Termite Trap once termites have attacked, or, the pouch can be installed directly on timbers containing live termites. You can choose to wait and buy the bait once you have live termites aggregated and ready to feed.

The termites take the bait back to the colony where it not only kills them – but the whole nest! It will take multiple feeds but it is the most certain way to kill termite colonies.

If you can feed the same colony from two or more Traps or from a few places in a building, more bait gets back to the nest more quickly and the nest is killed faster.

The process usually takes a month or more but at least it is the most certain/sure way to eliminate a colony. When they are no longer feeding, it’s because the colony is dead.

The treatment is an insect growth regulator that is not toxic to humans, pets, or wildlife.

Note - The Colony Killer Termite Bait is approved by the APVMA in Canberra (the Australian Pesticides and Veterinary Medicines Authority) for use by homeowners.

HOW TO USE THE TERMITE BAIT 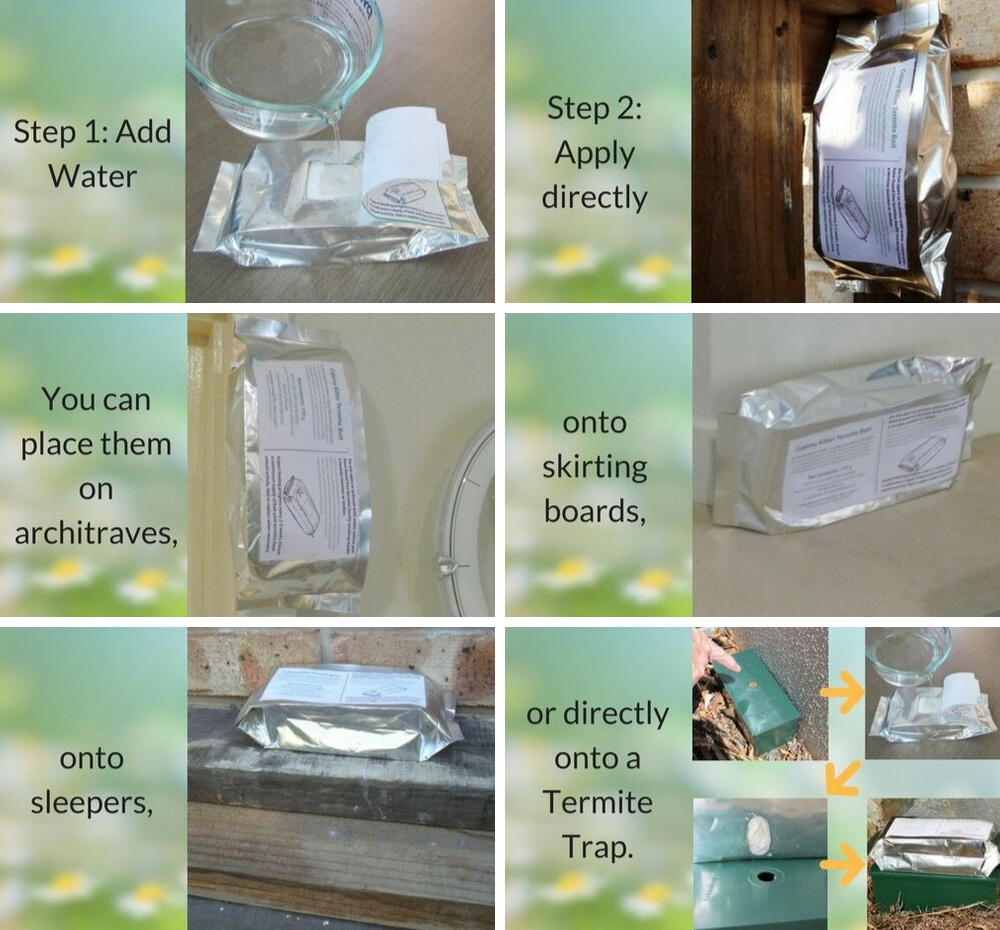 Check the Termite Bait every 10-14 days and replenish it with a new bait as necessary until all activity has ceased.

Is it legal for homeowners to buy and use your bait?The Colony Killer Termite Bait is approved by the APVMA in Canberra (the Australian Pesticides and Veterinary Medicines Authority) for use by homeowners.

Can I add bait to the damaged timber?Only if there are live termites present.

Finding hollowed out, damaged timber means termites once were there. That may have been yesterday — or years ago.

For baiting to be successful, termite workers have to harvest it and take it back to their nest. No live termites? No workers to do the job so the bait will just sit there, wasted.

We once sold cartons of 6 post-shaped monitors to be dug into garden beds. Six was about enough for a small town-house block. We tried to encourage customers to buy a second or third carton if they had a bigger block and more buildings. The extra cartons were seldom bought. I felt many were jeopardizing their home by wishfully thinking they had sufficient Traps.

Empty galleries may be the result of the access tunnel between the nest and the timber being severed by gardening, etc., or by the investigation of the extent of termite galleries done to the timber at the time they were discovered. In this last scenario, the termites will usually seal up their access to the opened up area because it is too big a job for them to repair in a short space of time. They choose to make this seal at a narrow area back closer to the ground.

Putting bait back in the damaged area will not entice them back.

1.You should tap and investigate the rest of the accessible timbers in the building to see if you can find where there are still live and busy termites. You will be looking for uneven surfaces, mud between joints, and/or a hollow sound in response to your tapping. If you find action, start baiting; if you find damage but no live ones, leave a small hole (3-5mm) and see if it is repaired overnight. If it is, then termites are in there and so you can begin baiting.

2.You should (if you haven’t already) check for hollow trees or stumps within 30-50 meters of the building. If you find termites in such a tree or stump, there is a good chance it may be the source of the termites that did the damage — but don’t count on it. There may well be other colonies around.

3.Placing a ring of TermiBricks around your buildings gives you a high probability chance of intercepting scouting termites looking for food (especially as the food they were enjoying is now off-limits).

How does the bait actually kill termites yet is safe for humans?

The chemical, Chlorfluazuron is an insect growth regulator (IGR). When consumed by a termite, it impairs the ability of a termite to molt. Molting is the process by which termites, at certain points in their development shed their existing exoskeleton and form a replacement exoskeleton. Termites so affected are incapacitated by their inability to complete the molting process and die. It affects a termite only at the points in its life cycle when it molts. Because all the termites in a colony do not molt at the same time, the effect on the colony as a whole is progressive. The nymphs, concentrated inside the nest are most affected because they molt several times in their first year. Workers, soldiers, and royalty also molt but less frequently.

The decline of the colony, the speed of its decline, and its elimination depend upon the size of the colony and the extent to which the bait is made continuously available and the extent to which its members consume it. Such factors may include low or high temperatures or abandonment of feeding on the bait by the colony for any reason. Depending on your climate, it is possible that if you discovered and began feeding bait to termites in winter, the decline of the colony may be more gradual until the warm days return.

Humans are not affected by this IGR. It has no cautionary warning on the approved label and is deemed safe; if your dog gets to bait and eats it all, it has become expensive dog food and the event is an interference with the job of killing termites. Our Ninjas meet the highest quality standards and modern requirements. We not only offer ecological alternatives, we also ensure that our products are the best in their segment. We have achieved this by developing products... PROTECTA LP is a triangular shaped, rat-size bait station that fits in corners and flush along walls where rodents travel. Its “Low Profile” makes it ideal to use indoors under pallets and in other tight...